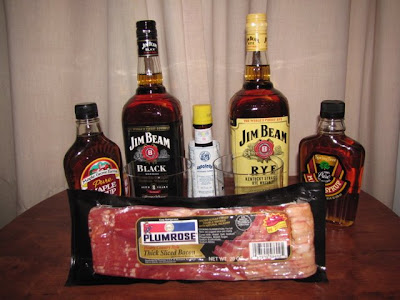 That's right. Those are all the ingredients needed to make an Old-Fashioned with bacon-infused bourbon ala PDT's recipe.

I'm actually gonna infuse two whiskeys with bacon. Jim Beam Black and Jim Beam Rye. I want to see how the bacon infusion affects the bourbon and the rye. I also bought two different kinds of pure maple syrup. And I'm using a thick-cut bacon that has been hickory-smoked twice as I want to get a real smoky flavor out of the infusion process.

And hey...look! A new picture of the kittens! 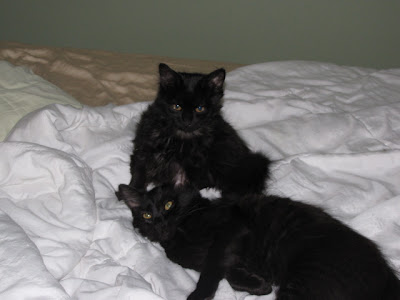 That's Gogo on top. She's fluffy. And Wolowitz right beneath her. We had a little scare with him last week. He walked into the living room looking like his front right leg was broken. We took him to the Vet and had x-rays taken, but nothing was broken. Some anti-biotics and an anti-inflammatory later he was just fine. And we had him fixed while he was there. Easy peasy lemon squeezy. Gogo heads in for her procedure in about 3 weeks. Rawr!

Nothing says, "I love your sister more than life itself" like bourbon infused bacon.

dude, those ingredients are like a heart attack waiting to happen

That bacon makes me jizzy all over. Also, I also got a kitten. It is named "sushi". She's a white little kitty that we adopted from the ASPCA.

That should be interesting!

You must let us know how it all turns out K???

The kitties are cute!!

Bourbon infused bacon? i have never heard of such a thing. post the recipe please. or is it as simple as putting bacon in bourbon, like a marinade?

Bacon and booze... it's going to be a nice party.

And I feel your pain on the YouTube bullshit. I know it's not all YouTube to blame, but at the same time, I don't see any other video services getting trampled by the RIAA fucks.

I request a follow-up post regarding how the bacon infused goodness turns out. I've always wanted to do that, but never have.

Faiqa - I think you just stumbled onto something. Bacon-infused bourbon is great, but bourbon-infused bacon sounds REALLY GREAT!!! ;)

Jiggs - Aww. You DO have a heart. Don't worry. I won't tell anyone.

Avitable - it is one hour into the infusion process as we speak. Er, type.

Michelle - I will follow up on Monday with a detailed review.

Joe - No, you infuse the bourbon for 4-5 hours with bacon grease. Then you freeze it so you can spoon off the fat. The process is called fat washing. The recipe on how to do it is in the link for PDT's recipe up top there.

Must be an American thing...

I just thought of this. What about apple muffins with maple frosting and bacon crumbled on top.

THAT would be a good breakfast.

No, not maple frosting, that doesn't sound good anymore... the apple muffins topped with maple syrup that is hot enough to candy with bacon in the syrup.

Ookami - I'm sorry, I don't understand. Where is the booze in that concoction?

It would be advantage to us both if you sent over a wee drap of a taster, reet?

I'm with Heff. Please reveal the results of said feed-bag on Monday. That sounds way so tasty. And awfully nice Earl....

Jimmy - the first batch is a test run. If it comes out the way I hope it does, then I may have to share.

No, no booze... although a drizzle on top would work.

I just was thinking of other maple bacon things to make.

By the way, if your plan includes the huge ice cubes, I'll be super impressed! ;)

I remember reading your other post about this. It sounds great.

Holy Moley... I wish it were Jill's birthday everyday!!

Oooooh, booze and bacon. I love it. Would love to sample the fruits of your labor. Wait, that didn't sound right.

WLC - I'm going on an Odyssey tomorrow morning to see if I can find those ice cube trays. But be prepared to be disappointed.

Zibbs - I just took a whiff and it certainly smells good. We shall see.

Becky - But what about PA's crazy blue laws about sending booze through the mail? ;)

I fucking new it even before I scrolled down and read the post. A friend of mine made it. (He got the recipe from your guys.) Totally rocks the fucking house!

bobgirrl - it smells great. The tasting will occur tonight. BACON!!!

Becky - that's how all good crimes begin. With a promise. ;)

A Woman Of No Importance said...

Wonderful black kitties, Sir, such treasures, and that bacon - I can smell it frying from here - Yummm, and I'm a vegetarian, so I'll just have the rye, please!