Tales of the Black Freighter - DVD

"I was a horror. Amongst horrors I must dwell" 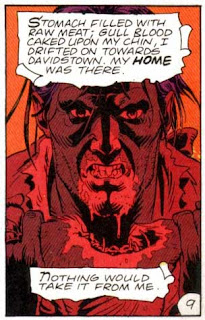 Man, I love Netflix. When I saw that Zack Snyder and company were prepared to release an animated version on DVD of the comic-within-a-comic "Tales of the Black Freighter" to work as a companion piece to Watchmen, I immediately put it on my queue even though it wasn't going to be released until a few weeks after the film debuted. So I was pleasantly surprised to see it in my mailbox today. I was even more than pleasantly surprised to see that the DVD included a faux documentary based on the comic-book called "Under the Hood".

For those of you not familiar with the source material. "Tales of the Black Freighter" and its' story (Marooned) is a comic-book that we occasionally see a glimpse of in Watchmen as a young kid reads it at the local newsstand. It was a pirate comic-book, which became very popular during the 1950's when the popularity of superhero books waned. It worked as a wonderful allegory and companion piece to the main story, often bleeding into one another.

The Black Freighter itself is an allusion of death, just as it was in The Threepenny Opera by Bertolt Brecht. Here is the captain of a ship who feels he has failed his crew as he is the only survivor of a mass slaughter at the hands of the pirates. He is surrounded by death and horror, borne of the backs of death and horror until he ultimately becomes the embodiment of death and horror. It's not an uplifting tale, but it is very true to those EC pirate and horror comic-books of the 1950's. And certainly an important piece of the Watchmen puzzle.

Another important piece is the faux documentary "Under the Hood" which is also included on the DVD. This replaces the written pages from the "Under the Hood" memoir that the original Nite Owl had written in Watchmen continuity. I actually enjoyed this part of the DVD even more than the animated short. Here we are given more glimpses into the world of the earlier costumed heroes. The back story from the opening montage is fleshed out a bit in the form of a television expose into these heroes...complete with time period appropriate commercials. Lots of fun.

My only complaint? Just like Dave2's review of Watchmen, I felt it was the little things that were left out or changed slightly that got under my skin. They filmed the Black Freighter stuff almost identical to the comic-book, but it didn't duplicate the monstrosity that was the pale, mottled, giant shark. I always felt like this monster from the depths was another form of death and horror that was thrown at the sea captain. One more piece of the madness puzzle that he would eventually complete. By making it more of a normal shark, it seemed to take away a bit of the horror of it all. Don't know why they did that.

I also missed the sadness and tragedy of Moe Vernon's story from Chapter 1 of "Under the Hood". They touched upon why Hollis Mason become the Nite Owl, but this certainly was a part of it and they left it out. Mason told the story of Moe's suicide and called it the "saddest thing" he can remember. The sadness is something he is trying to erase by dressing up in costume and fighting crime. It's a recurring theme throughout the rest of the comic-book and it, the sadness, inspires many of the newer "heroes".

Anyway, it was still worth while. The sparse extras were fun as well. I'm still waiting for the ultimate edition of Watchmen that incorporates all of these pieces into one massive viewing experience.

Mr Earl, you have a remarkable talent of taking any subject and within seconds enthusing your audience to the point of no return.

God help us should you ever begin a career in selling used cars or real estate.

Jimmy - And I've got some swampland in New Jersey that you may be interested in. ;)

I didn't realize they were releasing that before the movie came out on DVD...Off to Netflix!!

Totally agree with Jimmy! Do you know how many times you've gotten me all excited about something? Ok, well I don't know either, but its A LOT of times!!

ive been waiting for this to come out, but like you said, i will wait till its all packaged together into 1 nice, delectable, blu-ray bundle...

Michelle - should be watched in conjunction with Watchmen, just so you know. Enjoy!

Slyde - I'm sure they will do a nice blu-ray package for it all. Hehe...package.

It's funny-"video stores" are becoming a dinosaur today.

We've got on-demand and Net-Flix-who the hell want's to pay late fee's to Blockbuster if we don't have to.

NetFlix is the greatest thing ever!

The Watchmen was my first graphic novel... and i read it last week. My brother kept insisting that i read it, and finally he just showed up one day with novel in hand and said, simply: "read it"

after a few weeks or months, i finally got around to it, and i wish i hadn't waited as long as i did. it was awesome, and that's coming from someone who is not a comic fan by nature. i had a hard time, in the beginning, getting into the whole comic-brain that you need to read them, i would find myself, at first, reading the dialogue and not looking at the artwork.

After a while, though, i found it very refreshing to have all my information, all my descriptive words, there in front of me. I didn't have to read about how it was raining and they were all huddled together at the grave site, i could see it.

anyway, my point is... it was awesome. i still haven't seen the film yet, i blame the baby, but i'm looking forward to it!

Candy - it might be. And we just got the Roku player so we can watch all the "instant" movies anytime we want on the TV. Sweet!

Diva - The great thing about the comic-book is that you can go back and look at things or re-read the written stuff as you are going back and forth. I think the ultimate edition of the DVD will be the same with the film, the Black Freighter and the documentary.

I'm gonna have to get in to this Netflix thing...

Heff - for a movie fan, it's an absolute joy.

I recently came across your blog and have been reading along. I thought I would leave my first comment. I don't know what to say except that I have enjoyed reading. Nice blog. I will keep visiting this blog very often.