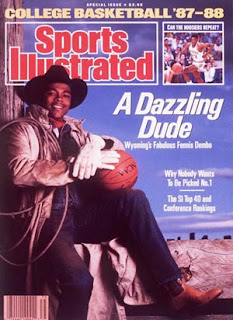 Fennis Dembo (Wyoming Cowboys) - Easily my favorite basketball name of all-time. Fennis Dembo led Wyoming to the Sweet 16 in 1987 in his junior year with a series of bravura performances. He was the leading scorer in the tournament that year, averaging 27.8 points per game including a 41 point outburst against UCLA in the second round. A game in which he verbally bitch-slapped Reggie Miller to the point of tears. I believe he is still the leading scorer in the history of the Cowboy's basketball program.

I watched an awful lot of games on ESPN back then and I saw Dembo play quite a bit that season. Plus I watched him and his Cowboys make a run to the NIT finals the year before, I believe. Loved his game. Big, strong kid listed at 6'5" or 6'6" (I think he was closer to 6'3"), his forte was his inside game. That strength didn't translate into a long NBA career, unfortunately.

He played one year with the Pistons (and won a championship) in 1989 after being drafted in the second round the year before, but he was released soon after the season ended. Not fast enough to play small forward and not big enough to play power forward. A classic "tweener". He played abroad for a while and in the CBA after that, but never made it back the big league. But there are those of us who will always remember his antics, his power and his love of the game back in the late 80's. Fennis Dembo was a special player.

An interesting use of the French language. I also have a pal named 'Fin'.

Coincidence? Maybe.. he was the last of 8.

love where the names came from! funny stuff.

i'm not a basketball fan. although i should take this moment to remind you that my pitt is number one, bay-bee! whooooo!

(that sounds happier than i really feel about the whole thing. again, not into basketball.)

Looking forward to a calhoun/calipari showdown and seeing louisville in the final 4. Possible repeat of '85 with an all big east final. Are there other conferences?

oh yeah, gotta route for binghamton. where the hell did they come from? if duke looses the binghamton, coach k should retire

No clue about the basketball stuff.

Jimmy - methinks no on the coinkydink.

Becky - it's the most wonderful time of the year, and you should be proud of your Panthers. Great team. I can see them making it to the Final 4 showdown with NC (only Duke and 'Nova really stand in their way), and then who knows?

2abes - '85 was a great year. Well, except for St. John's losing to Georgetown 3 times. WTF, Louie? Couldn't you figure out how to bust the box and one on Mullin? And, um, Duke will crush SUNY Binghamton. How they will do in a potential Sweet 16 matchup with 'Nova? I dunno.

Michelle - more fun than a barrel full of idiots!

For some reason, the name comes off as "Dennis Fembo" to me....

I always thought having more than 3 children would be way too much. They wouldn't fit in the back of an ordinary car. But knowing that my 10th child may grow up to be a famous sports person... I guess I might consider buying a mini bus xx

Slyde - Get used to it this week.

Heff - Well his Mom changed Dennis and Denise to Fennis and Fenise, so yeah...

GREAT IDEA!!! Love these, and I did not know the little name tidbit about Fennis..

Thanks for the memories, plus additional trivia. Love this season!

LegalMist - Heya! It's the most wonderful time of the year (as sung by Andy Williams, I guess)

I'm glad to find at least one blogger that also loves the March Madness. I've never heard of Fennis Dembo, thanks for introducing me.

Brandon - all my March Memories this week are going to be from the mid-late 80's. When I was in college. So a bit before your time.

I wish I could fennis HER dembo.