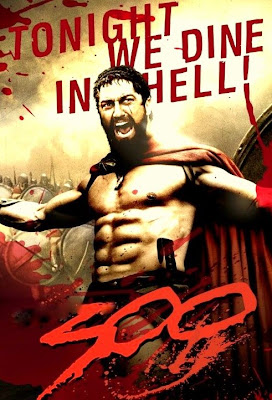 Possibly the worst attempt at editing a movie poster ever. It kinda looks like a 500. Doesn't it? Damn!- Earl
500 posts.

Seems like a lot. To me, anyway. And I couldn't even think of something original and/or fun to do with this shit. I'm feeling a bit lame this week for several reasons. None of which are important enough to mention here. Mostly just a bit under the weather, I think.

So how about a little trip down memory lane then?
And, well...you get the idea. Lots of other stuff that is too recent to reference right now.

So here's to the next 500 posts. Maybe by then I will find something actually interesting to write about.

But I doubt it.

Labels: Tonight we dine in Hell

I stayed up for this man!!

Congrats and um holy shit you don't look like ANYthing like um, the earl picture in my head, weird or is it wierd?


ok will follow the rest of the hyperlinks and such tomorrow.

glad to have you in my bloggerhood

Holly - and pray tell, just what did I look like in your mind's eye?

Well, this certainly is a milestone. Congratulations. It's been a fun read, so far. Here's to the next 500!

A Woman Of No Importance said...

I only became a follower recently, and this has shown me so much more about you than I might have ever wished to know...

I might not be back... Then again, I might - I'm a sucker for a Green-Man loving, grey haired, rude, beer drinker!

Great posting, Sir - And I found you via the bold Michelle's blog!

Congratulations, even if you're wrong about Superman.

thanks for all the links. i'll be back to dig through your older posts.

Green man you know the first link i clicked on was the one with the photo of you!! COOL!!

I had no picture in my head as to what you looked like. Well, thats not true, I thought you were green!!!

badger - and you were pretty much there from the beginning. Masochist!

A Woman - Heya! Thanks for stopping by and, um, enjoying the ride. ;)

Becky - is there any bourbon in that mug? Too early? Damn!

Michelle - Amazing how so many missed that the first time around. Thanks!

500?? I am appropriately humbled.
Congrats to you on a most excellent accomplishment.

For the life of me, I still don't understand the appeal of "Brooooce".

Congratulations, looking forward to the next 500.

Heff - I didn't either. Until I went to that show. I'm still not a huge fan, but that show was amazing.

I for one look forward to the next 378 posts. But not one more than that!

ya know, you COULD have just linked to your original posts over at my site... i brought EVERYTHING over when i came to blogger.

I recall the first one I ever read was your bizarre blog about the Scissor Man. I was sort of hooked after that. The right blend of history and down-right weirdness is hard to pass up. Been enjoying most of what followed since. Party on Verdunt Dude.

Persian Coward! You've always looked exactly as I pictured you. ;)

Bruce - as I've enjoyed your take on things. Rock on!

Many thanks for your longevity. Entertaining as ever. Congratulations dude.

AK - Entertaining? Hardly. Better than a root canal though, I betcha. Thanks! ;)

Oy, I love that FART in the office story! I'm still wiping away the tears..
Hey congrats on all the blogging babbles.. Very entertaining stuff! You're fun.
:)

Marty - why thank you sir!

I like this post! For those of us who haven't been reading since the beginning, it's a great round-up that makes me want to continue reading! :)
Congrats on the 500th! That's a LOT!!!