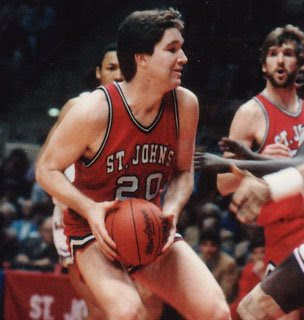 For me, nothing will ever get better or worse than the 1985 NCAA Tournament. Confused? Well, let me explain. I'm a St. John's fan. Yeah, it's been a rough stretch these past 20+ years, but back in the 80's they were they bomb yo! And 1985 was easily their best season featuring their best squad. They only lost to two teams that year. Niagara, and there are scientists still trying to figure out that one, and Georgetown. The problem is that they lost to the Hoyas three times that year. THREE TIMES!

Oh, they did manage to beat them once* in their first regular season meeting of the year. By one point. Then Georgetown's coach, John Thompson, switched up defenses by employing a box and one against Chris Mullin and beat them easily in their next three matchups. Once in the regular season, once in finals of the Big East Tournament and again in the Final Four of the NCAA Tournament. St. John's probably beats the other two teams in the Final Four that year, but they lived in fear of Patrick Ewing and friends at Georgetown. Or so it appeared.

So, yeah...1985 kinda was bittersweet for St. John's fans like myself. I still haven't really forgiven Coach Louie Carnesecca for failing to figure out a way to beat those guys after seeing them so often during the year.

But what a tournament! Three teams from the Big East along with Memphis State, and the greatest upset in the history of the NCAA tournament as #8 seed Villanova played a perfect game against the mighty Hoyas in the Championship Game. I can still see the players on the court for Villanove. Ed Pinckney, litte Gary McLain, Harold Pressley, Harold Jensen, Dwayne McClain, etc... All coached by the diminutive Rollie Massimino.

What an incredible tournament! Maybe the best ever.

*I haven't looked this up, but I can't remember any other two teams playing four times over the course of a season. It would require the perfect storm of running into each other in their own conference tournament AND the NCAA Tournament. I don't think it has happened since. Maybe Duke and UNC. Anyone know?

I just hope that cal makes it out of the first round. go team!

Holy Faither, all this talk of the baseball and now the basketball is making me envious.

I'm tall enough to reach the hoop by crikey, but I'm also built like 2 Sherman feckin tanks! Will I have to pass on being a star of American sports?

Life can be shite sometimes so.

I have always been agravated that Ewing was able to throw a wrench in St Johns NCAA hopes, but was never able to bring home the championship for the Knicks.

Sorry green man, I just don't know enough about this March madness to comment on it!!!

I'm with Michelle. Not a big hoops fan. Sorry.

ya know, you dont have to just TALK about basketball...

you COULD actually get a ball and PLAY sometime....

I remember sitting in my freshman dorm room watching the final game...put Georgetown on the map for me, I became an instant fan for years.

Jiggs - no sure thing with that 7-10 matchup. Maryland is a good team.

Jimmy - Basketball needs enforcers too. Big man can rebound, yo!

Slyde - "Ya know" works just like "Um" on the smarmy scale. And I have played more basketball than I care to admit. Especially back in college while you were locked in the library with the other RPI nerds.

Candy - I was a freshman that year too. Samesies! ;)

ya know, bite me.

Slyde - Um, you would probably like that. Ya big fairy ya!

Ya see, this is where you and I really differ Earl....you get all into this college basketball hoopla....and I am all about watching that Dancing With The Stars shit. Different strokes for different geeks.

Bruce - aye. College hoops and Dancing with the Stars couldn't be further apart.