As evidenced by my fuzzy head and sleepy body on Sunday, the bacon-infused madness from Saturday night was a success!

Everyone who tried one of my special cocktails at the party absolutely loved them. Or they lied to my face about it. Nah! That can't be it. 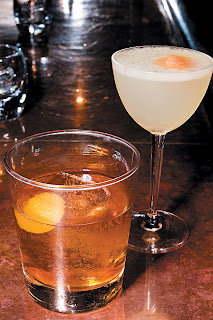 I made Old Fashioneds all night long for whomever wanted them. Instead of simple syrup or sugar, the PDT recipe calls for Grade B maple syrup. So that's what we used. Gia found some at a Whole Foods Market in Manhasset. I had heard you could only get Grade B maple syrup in Vermont, but they carried it.

There were big differences between the infused Rye and the infused Bourbon. Both came out a bit sweeter (especially the Rye) than I anticipated. Maybe it had to do with the bacon I used. It was hickory smoked twice and cured with maple sugar. That might have been the reason it turned sweeter. The Bourbon had a much more smoky, bacon flavor while the Rye just became ultra-smooth and sweet.

So what was the verdict? Which did I enjoy more?

Well, I did like the Bourbon and I think it tasted very similar to PDT's recipe. But I really loved the Old Fashioned made with the Rye. So smooth and wonderfully sweet. Rye is generally a bit more bitter and drier than Bourbon, but something occurred when I infused it with the bacon to really smooth it out. I really loved it. I wasn't alone. Just about everyone who tried both loved the Rye just as much, if not more so, than the Bourbon. If anyone out there is thinking of trying this, I would highly recommend both. But if you are really looking for that smoky, bacon flavor then I would go with the Bourbon.

I'm sure there are other cocktails that would work with these as well. I would love to try a Manhattan with the bacon-infused Rye. I wonder if that would work.

Anyway, like I said...it was a success! Yay me!

PS - New beer review over at the Beer-Eyed Blog. Checkitout!

Bacon and bourbon.. on paper it sounds like an odd match. It obviously isn't though, well done for creating a great drink.

Jimmy - wish I could take the credit for it. Those kids over at PDT came up with it. 'Twas delish though.

The only way I'd ever get to try these drinks is if I go to PDT so perhaps someday I will!!!

Michelle - I highly recommend PDT. It's my favorite of the new speakeasy-ish joints in NYC. A very unique experience.

I think I would like to try making a bacon milkshake.

on my list for the next trip up north, sugar! ;) xoxox

Avitable - I think I just threw up a little in my mouth.

Savannah - You've got bacon, right? You've got bourbon, right? So why wait? You can do it at home, and it's not that difficult. Hell, I did it. ;)

I can't drink hard liquor. You know....I'd end up huggin the porcelain god. I have to stick with my Bud Light!!

Oh my that sounds fantastic! But a cocktail?? I thought you were serving burbon infused bacon. See where my head went-my bad.

Anyway, could this be a second career for you??

Candy - Ha! When you left a comment about bourbon-infused bacon on the last point, I thought you just made a mistake. Now I see that you just didn't get it. Ha! And I've always been a bartender at heart. :)

What can I say ? If that shit tasted half as awesome as it seems like it would, it had to be some great stuff.

Heff - it was all that and a bag of whatever.