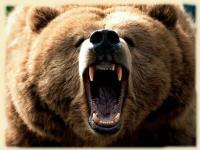 A group of about thirty of them are stalking and killing scientists trapped in a remote area of the Russian wilderness.

Looks like Stephen Colbert knows what he's talking about.

Excerpt from the above Wikiality link on Bears:

"Bears are soulless, godless, rampaging killing machines. They are Satan's minions and the TRUE symbol of evil. Once believed to be the work of dragons, Bears (like purple donkeys) enjoy running around the woods molesting and raping innocent people and squids. For years now, ravenous bears have had free reign to use our woods as their personal latrine, protected by their "endangered" status. Now the government is wisely considering ending the grizzlies' special treatment in order to protect our honey jars and Paddington Station. Bears' strong vitality and resilience makes them one of mother nature's nearly unkillable animals. A bear has never been downed by any less than five gunshots. Combinations of high explosives, assault weapons, and trebuchets have been known to only piss the bear off. Why can man-kind put a man on the moon, but not invent a weapon that can take down Big-Yogi over there?"
Pissed in the corner by Verdant Earl at 1:12 PM

Nothing worse than being shagged by a purple donkey when taking a walk in the woods I often remark...

WR - is it the color purple that bothers you in particular, or...

I hear I am stepping into some weird terrioty by coming to your blog, but, If, I could take Evyl i can take you :) Nice blog that you have here and I say that is FREAKY!

Weird is good as far as I'm concerned.

why does it always have to come back to me? you must really love me...

Slyde - it's a love/hate thing.