Gary Oldman and...um, something to ponder 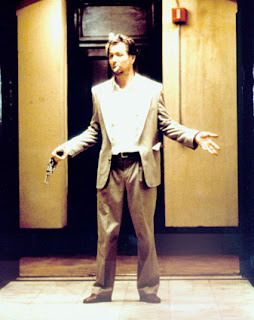 I don't know if I really have a favorite actor. There sure are lots to choose from. I do know that Gary Oldman would most likely be at the very top of that list. He's excellent in just about every role I've ever seen him in. From Jackie Flannery to Lee Harvey Oswald to Drexl Spivey to Stansfield to Sheldon Runyon to Sirus Black to James Gordon and so on. He disappears into these roles. The only problem is the length of time he is on screen in these movies. They are all supporting characters roles.

Sure, Oldman has had some starring turns. Sid Vicious. Ben Chase in Criminal Law. Dracula. Ludwig van Beethoven. All great roles. The most recent being Beethoven in 1994's Immortal Beloved.

Really? Did Hollywood just forget about him or did they just never figure out how to get this incredible actor a featured role that would fully make use of his talents? I'm not really complaining. He brings so much to even his smallest roles. He was even decent in the awful remake of Lost in Space. That's a miracle!

I find it hard to believe that not only has he never won an Oscar for his work...HE'S NEVER EVEN BEEN NOMINATED! NOT ONCE! There may not be a more deserving actor alive who has never been nominated. It's an absolute crime. Maybe it's because he picks such offbeat roles in heavy-handed genre flicks. Probably because of that. But he's done some nice mainstream work as well. To me, some of his best work was in The Contender. That was a film that garnered some decent Oscar buzz for Joan Allen, but none for Oldman. And he was a force of nature in it!

But he keeps on keeping on. He still seems willing to take a featured role every once in a while (like the mediocre Dead Fish), but they are usually small movies. Where's the big-time director of a big-time movie who is ready to give Mr. Oldman the role all of his fans have been waiting for all these years? The role that will get him his naked golden statue.

In the meantime...enjoy this clip of Gary Oldman in Leon.


PS - I'm giving great thought to posting the first ever bug-eyed pic of yours truly. Well, I posted my tattoo before. Hey...it's right over there in the sidebar. No...this one will have a lot more Earl. I just haven't decided on whether or not I'm gonna do it. Hmmm.
Pissed in the corner by Verdant Earl at 12:01 AM

I'm totally with you on this one, BEE. I think my favorite role is the Drexl Spivey you mentioned. True Romance is one of my favorite flicks too.

Excellent call. There's so much Gary Oldman should have been nominated for and won. When you consider Nicole Kidman in 'the Hours', Marisa Tomei in 'My Cousin Vinny', 'A Beautiful Mind', Tommy Lee Jones beating Ralph Fiennes in 'Schindlers List', Angelina even being nominated for 'Girl Interrupted', 'The Color Purple' winning nothing over 'Out of Africa' - I could go on and on about the insane decisions. We all could. The "Academy" in its infinite wisdom rarely awards outstanding achievements, mostly opting for utter mediocrity. Go Gazza!

He was outstanding in Batman Begins as James Gordon, too.

MikeB - that was such a crazy role in so many ways. Only Tarantino could write a character like Drexl.

Avi - yeah I agree, I mentioned that role in the post as one of his great ones. It's the closest to Frank Miller's tough and very human Gordon that we've seen onscreen thus far. Looking forward to Dark Knight next week!!!

Oh yes, you did. Somehow I missed that!

I almost feel like one reason he hasn't been nominated is that he disappears into roles so well that people forget he's acting. Does that make any sense?

i think the reason he doesnt get more main-stream work in hollywood is that he is, in rl, just so fucking weird. I always envioned him as a very hard person to work with.

but i agree.. he's brilliant. True Romanance anyone.

p.s. I have seen the picture in question, and i say, go for it. Its fabulous!

I had really never thought much about it but now that you bring it to the forefront, yes, Gary Oldman is very deserving of one (or more) of the little golden nude dudes. Most definitely!

And have you decided to post a pic of yourself? I for one would love to see who is behind the bug-eyed blog. All along I've thought you were the little cartoon guy. ;)

teeni: that picture is actually a portrait i drew of Earl last year... he looks JUST like that in real life...

Slyde - fabulous, eh? Thanks for the Queer Eye thumbs up!

Teeni - I haven't decided yet. Let's just say I'm thinking about it.

I love that scene. I always think of Gary Oldman cracking his neck and just going nuts.

ajooja - I love when he goes to see Danny Aiello.

character actors definitely get the short end of the stick...maybe the underdog quality is why we love them so much though :)

I have a fun product review opportunity that you might be interestd in. I know you don't really do reviews- but it could be a good time!! AIM me for the deets: deelowinla

He is one of those unsung actors. Immortal Beloved was very good. It isn't easy doing Beethoven. He was the only thing that kept me from lighting the screen on fire after seeing Lost in Space (what a gawd awful movie!).

Lotus - After Oldman, it was only Matt LeBlanc who brought anything to that POS film. MATT FUCKING LEBLANC!!! What an awful excuse for a movie.