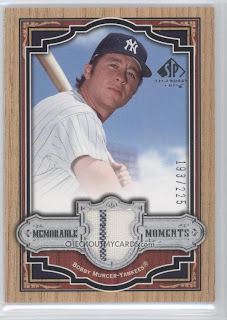 Bobby Murcer passed away today after a long battle with a brain tumor.

I know that people think that sports and fans, in particular, are stupid, but Bobby Murcer's death has really affected me.

He is one of my all-time favorite players and broadcasters, and from what everyone says just a great all-time guy. Gia's father played minor league ball with him and the Yankees and he says that Bobby was the best. Best teammate. Best friend. Best all-around guy. The guys would bust on him at first because he was a big-time bonus baby and he couldn't hit worth a lick for his first month or so in pinstripes. Couldn't field either. But Bobby would just shrug and give them an aw-shucks grin and say "just wait". And hit and field he did. For some terrible Yankee teams, for the Giants and the Cubs, and then again for the Yankees to finish off his career. He was such a Yankee at heart that he wore number 7 for the Cubs just so he could honor Mickey Mantle.