***Long Post Alert***
First, did everyone see the man behind the curtain? OK...now that we've satisfied our narcissistic needs we can move on.. 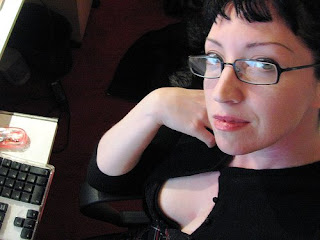 For those of you not familiar with the Fabulous Ms. Blue (I don't know her at all, so I won't presume to call her Miss), here's a brief outline. She was born a poor black son of migrant farm workers...um, wait. Strike that. I don't really know much about her background. I believe she grew up homeless for a while. All I do know is that she is one of my favorite bloggers. Has been before I even knew what the term "blog" meant. She's also an author, sex educator and columnist for the San Francisco Chronicle. I've got such a heart-on for her.

To be honest, I only read her blog. I rarely go to her columns at the Chronicle. Not because they aren't well written or sexy (they are), but because of the comments that she gets from so many angry trolls. It just makes me so sick to my stomach. I guess that everyone is entitled to speak their minds. It's a free country, or so they say. And it's not just that these trolls disagree with many of Ms. Blue's comments, that's actually fine with me. It's how they disagree that bothers me. With hatred and bile and misogynistic name-calling. It's really disgusting.

Trolls and trolling have been popular topics here in the blogosphere lately. Check out Avitable's take on it here. It's really something that makes no sense to me. I used to see it on a lot of bulletin boards, but trolls can live anywhere. Especially in the nutrient-rich world of the blogosphere. Sad for us.

But I didn't really intend to talk about trolls today. Sometimes a stray thought can just lead to a couple of paragraphs or pages when you least expect it. No, I wanted to talk about the latest controversy surrounding the lovely Violet Blue. She has been writing about Boing Boing, a website (I hesitate to call it a blog, but I guess it is) that she used to have a healthy relationship with. They loved her. She loved them. It was all good. But then something happened recently. Boing Boing deleted all of their posts that ever mentioned Violet Blue. And they did it without any real explanation.

After some back and forth debate on the topic, mostly in the comments section of the blogs, Boing Boing issued the following statement on the matter:

"Violet behaved in a way that made us reconsider whether we wanted to lend her any credibility or associate with her. It's our blog and so we made an editorial decision, like we do every single day." Source
They went on to say that no one was being censored. That they simply "unpublished" some of their own work for their own reasons.

That's a funny word, isn't it? Unpublished. It's almost like a something you would find in a 60's or 70's piece of dystopian science fiction regarding the systematic erasing of a personality or soul. I don't know. Can you unpublish something? I guess in the realm of the Internets, it's possible. But does anything REALLY go away for good?

There have been all kinds of guesswork as to why Boing Boing has done this. Maybe because Violet Blue famously sued an adult film actress for using the same performance name, and they didn't like that? Maybe because Violet and Xeni Jardin (a co-editor and contributor to Boing Boing) were once an item and have now since broken up.

The controversy over Violet Blue's "unpublished" status at Boing Boing (and it looks like some of the posts mentioning her have been un-unpublished just recently) has caused a few tongues to wag over journalistic ethics and standards. Is this kind of action reasonable for a big-time website like Boing Boing? Or is their explanation sufficient. It's their blog...they can do what they want with it.

Actually Violet has no problems with that last statement. Nor do I. To quote her "Yes, anyone can take down their own posts. But no one has the right to do it and turn it into an act of cruelty, sickeningly “for your own good” while trashing the subject. That’s repulsive." You can read more about what Violet has to say on the subject, including further links and feedback, here. My only problem is that websites like Boing Boing and contributors like Xeni Jardin aspire to be something more than just bloggers. They aspire to be journalists. And you can't have the aspirations without having to be held responsible for your ethics like any other journalist.*

*I've recently "unpublished" a number of my own posts. It had to do with some friends of mine who took issue with some of the things I wrote. I didn't necessarily agree with their assessment of what I wrote, but I never intended to offend anyone...so I took them down. But I've also never aspired to be anything other than what I am. A semi-anonymous blogger with no desire to ever be a journalist.

It feels like one of those grey areas, doesn't it? Like it's something that could be wrong and dangerous, but you aren't really sure. Yet it sits in the back of your mind bothering you while you try to justify their actions because "it's a free world".

I don't know what to make of it all. All I know is people are calling my Internet crush names and I don't like it! Not one bit. I don't hate Boing Boing. I've only read it a few times but I've found it interesting and amusing. I don't hate Xeni Jardin. She looks a little like the white-haired woman from The Matrix, but that's about all I can say about her.

I just don't like anyone calling my girl names.
Pissed in the corner by Verdant Earl at 12:01 AM

Your reasons for unpublishing make sense.

Boing Boing's reasons are a lack of journalistic integrity. They're not a personal blog - they're a professional resource. It would be the same as if the NY Times decided to remove some articles from its archives because it didn't like the reporter who wrote them.

This was a very hotly debated topic last week and over the weekend on an e-mail list I subscribe to.

Basically it boiled down to this:

1) Is Boing-Boing responsible to maintain links past a certain date? Technorati stops counting the links after 6 months, so is it unreasonable to "de-link" after that time period? The overall consensus was yes, it is more than reasonable, and in fact it would be appreciated if dead links were weeded out as well.

2) Because of the seeming perpetuality of blog posts, is "unpublishing" unethical? The overall consensus was yes, it is unethical because newspapers themselves create micro-filmed archives so why wouldn't a blog striving to be a form of media, irregardless of the personal ambitions of its writers, be held to the same standard? It should... but this conflicts with the previous "de-linking" consensus... or does it?

3) Can you be held responsible by your readership for the actions of someone today that you linked to in the past? The general consensus was no... because hopefully you were smart enough to use Permalinks as opposed to just a general link.

While it would be nice to think that these types of things are relegated to the "big blogs"... the truth is there have been similar incidents in the smaller corners of the blogosphere.

Personally, I see no problem de-linking with perhaps an annotation (which leads to the whole debate of "Is editing a post (x amount of time) unethical?"), I do see a problem unpublishing, and I think that if I disagreed with someone who I linked to in the past, that I linked to them in agreement to begin with and they need to be responsible for their own words/actions.

This is one of those "gray" areas... that has a whole lotta shades of it.

Damn. Sorry about making a post in your comments... I didn't realize I was doing it until it was done.

Avi - Are they a professional resource? For whom? They don't seem so different from any number of "big blogs" out there, but I've only scanned them.

NYCWD - I agree with the "de-linking" aspects, but the supposed reason behing the unpublishing is what gets to me. A grey area indeed. And no worries about the long comment. ;)

Well, they're professional in the sense that they typically focus on news, electronics, things like that. And I think that if professional bloggers want to be considered journalists, they have to regard the written word as sacred as real journalists do, and that means unbiased archiving.

Well, I had never heard of Violet Blue before but it sounds what was done to her posts was rather silly. If they don't want to allow her to post anymore, then fine, but to unpublish things they had previously published makes no sense and I do think it hurts their credibility. I liked what the commenter, Crosbie Fitch had to say and how he worded it. Kudos to you for sticking up for your internet crush!

Teeni - Just to clarify. They weren't unpublishing her posts...post written by her. The unpublished every single post that mentioned her or linked to her stuff.

I've unpublished several posts, and unlinked from blogs run by people who turn out to be douchebags, but I've never made a big deal about it.

If someone asks, I wouldn't have a problem responding but I doubt I'd make a big stink about it. That's kind of bush league. Pretty much what you'd expect from Boing Boing.

not that this has anything to do with the discussion, but VB just has never really done it for me. The few times ive went there, her posts seemed more to purposuly try to be outrageous than anything else. Not that she cant write well, but it seemed alittle fake to me, and left me with a big pile of "meh".

Unpublish consistently gets a red line under it. There is no such word. therefore - since it does not exist - it cannot be done.

ajooja - Another point of comparison. Boing Boing didn't make a big deal out of it. They simply unpublished those posts without a word or explanation why. It BECAME a big deal when certain commenters noticed and the bloggy world followed.

Slyde - Really? I think she is fairly straight-forward and no-nonsense. But to each his/her own.

RW - But "unpublished" is fine with a lot of spell-checkers. Odd.

Unpublish is trying to be a verb that wants to mean "we took the stuff that you had published and wiped our ass with it good bye."

Unpublished is a condition a writer who has gotten nothing published in the first place suffers.

See... those red lines and dictionaries are snart!

RW - makes sense. If I wuzn't stoopid, I probably could have figured that out. Thanks!

Oops. Sorry I got confused. It happens sometimes (sheesh - I thought i was following this one well too). I blame the chemo. It's probably just my brain but I feel better blaming the chemo. ;) Either way though, their credibility sucks for doing that. And it's actually an even less understandable thing to do than if they had deleted posts she had written. :shock: