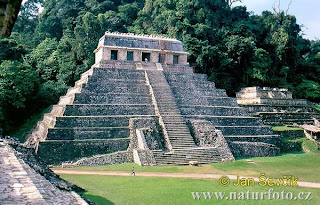 Or so claim some folks who have a hard-on for Mayan prophecy. They say that the world is gonna end sometime in December of 2012. I wonder what the gas prices are gonna be like after that?

The craziest thing about this AOL article is the poll that goes along with it. It asks if you/we think that something apocalyptic will occur on that specific day. 15% of the respondents said "Yes". Now I know that most of us here patrolling these Internets are idiots or we would never stoop to answering these polls seriously, but 15%!?!?

What kinda Mayan dope are these people smoking? Even if only 10% of those folks are serious, that's still 1.5% who believe the world will actually end on that very specific date. That's not just crazy, that's Britney Spears crazy!

PS - Oh, and I thought I was the only one who loved the opening scene from The Way of the Gun. Apparently not.
Pissed in the corner by Verdant Earl at 12:01 AM

You are most certainly not the only one that loves that scene... Pure class, and a fabulous movie.

I'm laughing out loud at that scene. Thanks. And I liked the title of the post: ... Mayan eyes.

Badger & MikeB - It's nice to know that some people appreciate that movie. Plus that was Sarah Silverman as the foul-mouthed bitch. "You wanna do the man dance?"

is that the pyramid of chizun-itsa? if so, i climed that after a 5 hour bus ride into guatamala back in the 90's.

and i LOVE the opening of way of the gun... the rest of the movie i could take or leave...

Slyde - I dunno. It's Mayan and I swiped the photo from someone on the Webs. I loved the whole film. Even James Caan weird neck.

I've often wondered if Phillipe flashed back to that scene during his divorce. Not that I would. At all.

However, it appears that atronomers think that the earth and sun will align with that black hole do-hickey and that is potentially a big problem because it can cause the poles to shift dramatically, hence, killing us all.

Since I do believe in a higher power...a non-denominational one...I can't pretend to know the mind of God. And seriously, I think they said something about 1984 that didn't quite pan out too.

According to some other crazies, something apocalyptic is supposed to happen to San Diego today.

San Diego? What did they ever do to deserve God's wrath?

Jerry Falwell would be so happy.

Mayans suck. I've never seen one of them that wasn't in serious need of a shower.

Limpy - I'm sure all sorts of stuff flashed before Phillipe's eyes during the divorce. Reese's character from Election is a likely one. Pick Flick!

RW - I thought it was next month. When they turn on that super-collidor in France/Switzerland. I could be wrong.

Steph - The wacky religious right messing with my gays again. Those guys!!!

ajooja - And they are always walking around looking like each other. I hate that!

The world actually ended on 6/18/67....what we are all living in now is an ongoing group hallucination.

lotus07: I only hope that's true. It would explain where I've been all these years! Maybe all I need is a shot of Nyquil to help bring me down...

globus isn't surprised by this. the mayans and incas were as stoned as monkeys half the time, so a legacy of drug-induced doom seems entirely appropriate :-)

Globus - That goes a long way toward explaining pre-Columbian art as well. ;)