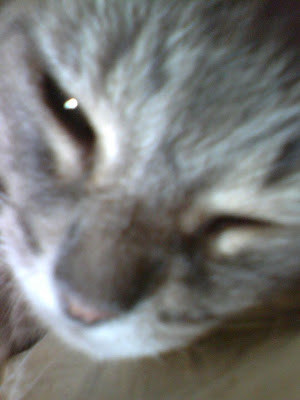 Over the past few months, our little girl Sammi aka Ebbs aka the Biscuit has been going through a metamorphosis. She spent years as the silent kitty. You would hear her every once in a while, but mostly she was a feline Helen Keller. Mute and blind in one eye.

But I decided a few months ago to make her my pet (get it?) project. I've been attempting to win the little girl over. This process is a slow one that has taken months to reach fruition.

It started with the simple task of picking the Biscuit up and holding her. Sounds simple, eh? But she is a 12 pound ball of claws and fury, and she does NOT LIKE TO BE PICKED UP. But I persevered. I began by picking her up a few times a day for only a few seconds. Then I would gently let her down. I slowly increased the number of times a day I would pick her up and the amount of time that I would hold her. Now I can hold her for almost as long as I want and she is fine.

For some reason, this arduous process also resulted in the Biscuit finding her voice. There is nothing wrong with her voice, she just chose to be silent for many, many years. She does meow differently than most other cats, though. I should get a recording of it, but it goes a little something like this: Step 1 - Biscuit opens her mouth wide. Step 2 - Biscuit makes a short, staccato "Ow" of a meow. Very high-pitched.

She's also got a lonely cat warble that she does when she doesn't think anyone is in the house. She never does it in front of us, but I've snuck up on her a few times and seen it in action. Very impressive. I think it's her version of singing in the car or the shower.

My ten-step plan has had only one drawback. Now she won't shut up and she is constantly up my ass! I can't lay down without her yelping to be scratched. I can't work on the computer without her sidled up right next to me on the couch. I've apparently grown a cat tumor. It's attached to me at all times. Yelping for attention.

Good grief!
Pissed in the corner by Verdant Earl at 12:01 AM

hahahaha Better get her a new buddy ;)

AND slyde you are not weird I dontcare what earl says :)

Kaylee - she has a buddy. His name is Syd, but they don't play together much. Besides the occassional cleaning session which always seems to wind up in a fight. And Slyde is very weird. That's how we became friends. ;)

Aww, but isn't it so rewarding when you've won them over? I give you lots of credit for the patience to work your way up to holding her as long as you like. That was incredibly intuitive of you and lots of people don't give cats their due because they think you can treat them the same as dogs. Anyway, I think it's neat that you earned her trust. LOL. Now you have to deal with all the affectionate consequences. :)

thanks kaylee, i knew i could count on you to protect me from the mean (and quite ugly) earl...

Slyde - Ugly? I resemble that remark!

You server cats, they don't serve you....you have no one but yourself to blame.

Lotus - Cats. Now that's a lifestyle I would like to emulate. Everything but the life span.

So what you're saying is that you're getting too much pussy lately?

We have a Siamese cat. They are very loud all the times. Like holler monkeys. But, they never get fat, so they have that going for them.

I keep a spray bottle at my bedside to curb the 5 am howl fests. Or I just toss anything handy at the cat, usually a pillow. That does the trick. Petting just encourages it.

So a good spritz, or flying object usually does the job.

Or, have some cat nip handy for a session of 'go crazy and pass out'.

That gave me warm fuzzies...

Limpy - if wishes were fishes.

Mrs. Hall - we have a laser pointer that they love to chase around. Gets them nice and tired. Your screen name is very formal. Do you mind if I shorten it to MH or something? ;)

Liz - Speaking of warm fuzzies, you should see Syd!

Madge - Hardly ever three in a row. More like "OW" pause, then another "OW" if I don't pet her quickly enuff. But you got it. ;)

As far as the name, um, I am new around the blogosphere so I am not sure what the protocol is. After all, this is your blog, you can do what ever you wish.

But I like Mrs. Hall. Noone calls me this in real life. Noone uses Misses anymore, it is all Miz. That is annoying. I am not a Ms, I am a misses. And I like this name, it is my name. I am proud of it. I enjoy the "Mrs. Hall" because this is what I am. It means a lot to me.

So short answer, no, I prefer the moniker of Mrs. Hall. Long answer, you do what you feel is best.