View to a Kill 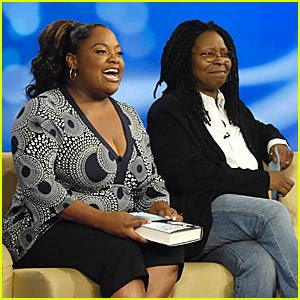 Does anyone out there know who Sherri Shepherd is? She's an actress and comedienne who most recently has been toiling on the Bahbah Wahwah meow-fest, The View. There she is up there pictured with Whoopi, who apparently is also on the show. Can't someone give Whoopi a real job?

I don't know if Shepherd is a regular on the program or if she is just filling in for someone. The View, as a show, is so far below my radar that aliens could have landed on Earth, taken over the show and I would never know anything about it. Unless the aliens said something stupid.

I gather that she is some kind of born-again Christian. An evangelist, I believe. This has lead to all kinds of interesting conversation on the program, because not only is she a simple-minded right wing Christian wing-nut (and I'm talking about her, not you)...she is just plain stupid! A quick review of her Wiki page reveals that she doesn't believe in evolution ("Period!"), that she may believe the World is flat (she just never really thinks about it), that Christians were around in Ancient Greece and were fed to the lions ("I don't think anything pre-dated Christians") and finally that Patti LaBelle may not be black. Imagine Patti's surprise.

Her latest bout of stupidity arrives in the package of an interview that he did with a magazine called Precious Times, a magazine for Black Christian women. In the interview she joked (as she claimed Wednesday on the show) that Evangelists like Joyce Meyer could lay their hands on Barbara Walters and "save" her. She didn't really say why Bahbah needed saving, but I'm gonna go ahead and assume that its because she is Jewish. Probably not the best thing to say about your boss, eh? Listen, if it was a joke, it wasn't funny. So there had to be a reason behind what she said. Maybe we'll hear about her reason after she gets shit-canned.

Even better is what she has to say about abortion*.

*Weird that this story broke Wednesday when Britt and Adam discussed abortion on their radio program. I'm writing this before they go on, so I don't know exactly what they covered. Something about a man's position/responsibility about abortion. Go ahead and click on those links and somewhere in there it will direct you to the show. - Earl

Being a Christian woman, she is obviously pro-Life. Her faith tells her that every single life is precious and that life begins at conception. So every sperm is sacred, so to speak. I would argue that the sperm used to make this silly bitch may have been wasted, but that's another topic.

My problem with women like Shepherd is that she IS the argument that many pro-Lifers have with abortion. Back before she was "saved", she was in an abusive relationship and she countered that by leading a very promiscuous lifestyle. She used abortion as a method of birth control. She admits this. Here is what she said in the interview:

"Before I converted to Christianity, I was a Jehovah's Witness. In 1993, my mother was dying from diabetic complications. My sister was heavy into drugs, and we would have to go and get her from crack houses. I was in a very physically abusive relationship. I was sleeping with a lot of guys and had more abortions than I would like to count. I had very low self-esteem and just wanted to die. I felt if someone killed me, it wouldn't even make a difference. But God showed me that it would make a difference."

More abortions that she would like to count. That, my friends, sounds like a lot of abortions. She has stated that she has finally made peace with herself and God because she will one day see all of her babies in Heaven.

What a pile of crap! I'm sure her "babies" will be thrilled to see her.

Besides being the poster-idiot for everyone on the Christian right prior to her redemption/conversion/whatever you call it, she sounds like she is just taking Christianity into her life because she is feeling guilty about her former preferred method of birth control. Listen, I have no problem with anyone embracing any kind of faith. It that is what turns you on, go right ahead. But if you read between the lines here it sounds like she A) doesn't know much about Christianity and it's history and B) maybe should be the last person in the World to ever talk about the evils of abortion.

This women has a public pulpit to discuss her views. That kills me.

So I am using choosing to use my pulpit to state the following:

Sherri Shepherd is an ignorant ass-hat! Thank you.
Pissed in the corner by Verdant Earl at 12:01 AM

An ass-hat indeed. Luckily we don't have too many folks like that over here.

I'm just reading the Wikipedia entry - "She is developing a half-hour scripted sitcom based on her life for The CW Network."

That'll be a barrel of fucking laughs.

badger - a sitcom about a stupid, self-important, "saved", former whore who used abortion as a method of birth control. I smell an Emmy in there someplace.

I am always baffled by someone who has supposedly made specific "mistakes" - or whatever - in their life, and then shows a complete inability for compassion towards others later on.

Great post. I was laughing through the whole thing, except it's not really funny. These Christian rightists are too much. I love the ones like her who think their credibility is enhanced by revealing a shabby past. What nonsense. Oh, and the video was a riot.

Britt - Obviously I don't know this woman, so I don't know if she isn't compassionate toward women who choose abortion. Intolerant is probably the word I would choose, but as a "Christian" she should be compassionate. Who knows?

MikeB - No, it's not funny. It's sad. But the Monty Python gang always manage to put things in perspective. ;)

When The Soup aired that clip of her saying that she didn't know what to think about the world being flat or not, I immediately disregarded anything that will come from her mouth subsequent to that point.

to answer your question about if she is a regular, yes, i beleive she is. I have only seen parts of that show about 5 or 6 times (usually when im home sick), but in the past year i think ive seen her on every time...

I did a video on her when she insisted that Christ came before everything else.

The #1 indicator that you don't deserve the job you have is when there is a petition to get you fired... on your own website.

I've seen The View only once or twice, but it seems to me that the show is aptly named because it seems to just be a place where a bunch of women talk about their "view" of stuff. I have no idea who that woman is and I don't care what any of the women on that show's views are so I don't watch it. Some of them are just a little too pushy with their own views. And they can shove 'em. I've got my own. ;)

What a maroon. I run into these people every day on BeliefNet (where I like to go needle them and pose logical questions to them). Unfortunately, there's a shitload of them in this country and, as well as being irritating, they're downright dangerous.

P.S. I like Whoopie. I just wish that fat ass wasn't sitting next to her.

One correction: "Being a Christian woman, she is obviously pro-Life."

Doesn't always follow. There are plenty of Christians - men and women - who prefer the country keep religious views out of policy and allow choice in the matter of abortion. Me, for instance.

wait, what's all this about the world being round?

ive noticed that many evangelical christians are ill informed and more often than not ignorant and close minded. i grew up around this environment and am proud that i managed to think for myself.

anyway, ive never had an abortion, but for anyone to say people shouldnt be allowed to have them just because they disagree is pious and overall shitty.

The more sunsets I get to witness, the less I tend to watch mainstream media, just for this reason. It would appear that unless you are extreme in behavior and idilogy, you aren't worth watching on television or listening to on radio because you don't have enough of an 'entertainment' factor.

I can't recall the last time I saw someone intelligent present and articulate argument in Primetime. It is entertainment first, and content second.

The media is turning all its viewers into simple minded, voyeristic idiots that believe that Brittany Spears has talent, Angelina Jolie is a good role model, and reality shows aren't scripted. We are a sad, sad, people.

Sherrie is a regular there on the view... loved your post...

Avitable - I've only seen written word evidence of it. The clip must be HI-larious.

Slyde - if anyone was gonna get down to the bottom of her appearances on the show, it was gonna be you. Thanks!

Teeni - they seem to try to make it relevant by having a Whoopi or a Rosie on it. i don't know.

Steph - I like Whoopi too. She needs a real job. I can't imagine what goes through her head sitting next to this woman every morning.

RW - Duly noted, and you are absolutely correct. I was wrong. No you are banished for 2 days for correcting me. Bastard! ;)

Limpy - well it's more of an oblate spheroid, but round is pretty close.

Dr. Zibbs - Welcome, and I bet you are right!

Sunshine - Welcome, and thanks!

The View is still on the air?