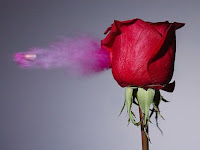 You know you want it. So here it is. Long post yesterday, so today you get just a few bullets. Ajoojapalooza-style! I kind of like that image there on the left of the bullet and the rose. I may make it my default image for any bullet-themed posts. What's that? You don't really care? Crap!

Labels: Nothing to see here

Other than the Ocean's movies, Brad Pitt is rarely smug in his roles. That's one reason I like him - he doesn't mind taking weird or dark roles. He was good in TAJJBCRF, but I think the movie was a bit too slow - should have been edited a bit more, I think. Casey Affleck was better in Gone Baby Gone.

Avi - I was thinking of the Ocean's films when I wrote that. Mr. & Mrs. Smith to a degree as well, even though I really liked that movie. I actually relished the slow pacing of the Jesse James flick. You knew where it was going, and the slow pacing made it almost painful to watch...in a good way. And Casey Affleck was great in both this and Gone Baby Gone. Did you ever see him and Damon in Gerry?

I haven't seen Gerry yet, no. I'll have to check it out.

Wait YOU were cleaning the house? And you think Brad Pitt is a smug prick (perfect description BTW). I think I'm a little bit in love with you... : )

Avi - strange film. Just the two of them lost in the desert. Interesting, nonetheless.

i have been wanting to see jesse james.. maybe ill pay per view it this weekend..

last week my dad told me that brad pitt is the one man in the world he would consider having sex with... i dont think i want to dwell on that...

Pitt and Casey Afleck are both really good in Jesse James, even though the story didn't do much for me.

Slyde - Brad Pitt told me the same thing about your Dad. Sounds like a match made in heaven.

ajooja - I can totally see how it might not be for some people. I really liked it though.

It doesn't come much louder or brings back youth than VH II.

Evyl - One might call it so good that its...evil? Mwahahaha!!!